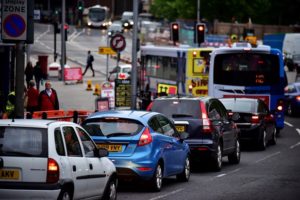 This is what happens when a Cycling Lobby goes OTT! You live in the world of “wouldn’t it be nice if” and not in the real world. You take over the real world and try to make it the one you want. You ignore the reality. You ignore other people. You even ignore the harm you do to yourselves.

You call this your “Vision”. In Newcastle on Tyne, I call it your mad idea:

“We think a street should be designed for residents rather than those driving through, with slower speeds and slower moving traffic , so people are more inclined to walk and cycle for their journeys, some or all of the way .” SUSTRANS Annual Review 2013-2014

You ignore air pollution in towns and cities from traffic, the toxic fumes that kill. The slower you drive the worse the fumes. You ignore the narrowness of UK’s roads, its twisty corners, its roundabouts. You ignore the fact that other people have lives to lead, livings to earn and need to get to their destination as quickly as possible. Your cycle lanes in towns and cities are not continuous. They are intermittent. Like pieces of spaghetti dropped in a bowl of soup. They are not segregated. They are on busy bus routes. They make narrow roads even narrower and add to the congestion. They are often dangerous. They are often empty.

And worst of all, while you try to be professional, you are the worst kind of amateur. No feasibility study first. No market research – I certainly can’t believe you did any in Newcastle. You don’t cost it. You have the naïve belief that money grows on rhododendron trees. It’s your equal human right to be on the road. Your right yes, on some roads; but not equal, different, and carrying some responsibilities too. Always wearing a helmet. Taking out insurance. Respecting other road users. Not riding on the pavement. Obeying the Highway Code.

As a result, the ratchet. No turning back. Jobs are created. Concept papers written. Imaginary figures dreamed up. Lots of meetings. Whips whipping. Minutes Agreed. Phoney consultation. Protest ignored. Work commissioned. Facts put on the ground. And then more work for the NHS. I’ve seen the ratchet in operation before in relation to Inclusion and special educational needs. It’s recorded at length on my website and in my book.

Sorry, the UK is not Sweden or Denmark. Its towns and cities don’t have wide boulevards. It’s hilly. It can be cold, wet, windy for months – today, as I write this, for example. And people like to shop with a hatchback not a back sack. And arrive at work dry. Kids should reach school safe. And central London’s London – where the only way some people can cost effectively get to work is on a bike. Mercifully other parts of the UK don’t have the same ridiculous property prices. Bus services and underground are good. Central London most certainly not the paradigm for the rest of the UK. Not such a wonderful paradigm for itself.

As I said in my last post, why didn’t you just stick with Vision Zero – promoting cycling where it is healthy with no fatalities or serious injuries in road traffic? Where you could achieve it.

In 1995,£43.5 million from the Millennium Lottery Fund;  In the 2004/05 your income was £23.6 million: £2.1 million from supporters’ donations, £8.5 million from the Department for Transport and a further £2.5 million from the National Opportunities Fund; In 2007 £50m from the Big Lottery’s Living Landmarks to fund Connect2; in 2014/5 of the £114m that Nick Clegg as Deputy Prime Minister announced  to double the number of cyclists on the road by 2020, a chunk I expect directly into your offices and a chunk indirectly as local authorities buy in your services.

On the back of this, your offices: Bristol (head office), London, Cardiff, Edinburgh, Belfast, Peterborough, Nottingham, Birmingham, Newcastle on Tyne, Manchester and Leeds.

The Times recently reported a 43% increase in serious injuries to cyclists in UK in last ten years. The BBC recently reported 22,988 accidents including 80 deaths for cyclists in London in last 5 years with a £m of being spent on known accident blackspots that accounted for only 391 of them.

The Royal Society for the Prevention of Accidents ROSPA said that statistics show:

Last, but by no means least, you make the elementary mistake of the planner. You fail to factor in human fallibility, including your own.

The Media is silent as the grave on your role. Oh, for newspapers like the Times, not now, but when it had as it editor Harold Evans of Thalidomide and Timothy Evans fame, when it successfully challenged the unacceptable and indefensible.

In my next post, the end of my story, where for me it began. In Newcastle.

PLEASE COPY THE LINK TO YOUR FRIENDS & COLLEAGUES