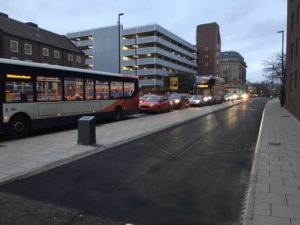 I thought it was a funny joke when a friend said to me that the wide, segregated new cycle lane in John Dobson Street in Newcastle’s city centre designed for the City Council by Sustrans was the longest skate-board park in the country.

On a couple of visits, I saw only two or three cyclists but, on the second, I saw young lads with skate boards, one trying to leap over an orange street bollard they had commandeered. He failed. Left the skateboard dangling on top of the bollard. Visiting a store nearby I was told that on Saturdays the very few cyclists on John Dobson Street that were there had to dismount, and give way to lads with their skate boards enjoying themselves.

John Dobson, the most noted architect in the North of England at the time, whose name had been given to this street, not turning in his grave, weeping in it.

Cyclists there are as hard to spot as they are in Gosforth High Street. That is where my story started. I can conclude the story here relatively shortly.  I can show you why I had to take it to its very bitter conclusion. Why I started it in the first place.

Everything that follows was in the Dossier that I gave to London, Human Rights Lawyers, Bindmans LLP, when I hired them to write a pre-action protocol letter initiating judicial review proceedings against the Local Government Ombudsman – for a white-out of my criticisms of Newcastle City Council’s plans for cycle lanes and red lines on Gosforth High Street. They said that the case for judicial review was “unarguable” and “bound to fail.” I shall keep this as short as I can.

This would have been at the centre of my application for judicial review:

Ms Kxxxxx, the Assistant Ombudsman wrote: “As I have seen no evidence to suggest Cabinet or the Overview and Scrutiny Committee received inaccurate information about cycling figures when making its decision to approve the scheme and there is no evidence cycling figures were the motivation for the traffic scheme I have no grounds to criticise the Council.”

ALL THE FOLLOWING WERE BROUGHT TO HER ATTENTION

It was because these figures and projections were so very wide of the mark that provoked me to complain in the first place. ·

Ms Kxxxxx was missing some brain cells not to spot all this, and the Council too, if none of this was in the minutes.

It is much worse. The “Overarching Aim” of the policy should have been in the Consultation papers supporting the City’s commitment to “open government” and in its Core Value 4 making “transparent decisions.”  Her total failure to see the “motivation” is confirmation that it was not there. Another thing not there. No mention of Sustrans and their Vision although the City Council had hired them to write the Bid and the Strategy statement. That cannot be right.

It was highly convenient to the white-out not see the figures because they were so patently wrong.

If she had come to Newcastle, as I urged, she would have seen for herself the almost total absence of cyclists. She might also have seen how narrow Gosforth High Street is and how cycle lanes would have compounded the congestion. Sustrans, of course, wants slower moving traffic.

She also didn’t fault the Council for breaches of its own Protocol – “an integrated and evidence based means of partners working together to determine priorities in the city.” She ignored the fact that there did not appear to have been any market research among motorists in the city confirming their willingness to use a bicycle instead of a car for all their journeys under five miles if there were cycle lanes to ride on.

When I pointed this out to her, alleging bias, the draft report remained unaltered, two other Assistant Ombudsman endorsed it, the Executive Director of Operations likewise, and the Ombudsman herself Dr. Jane Martin didn’t want to know.

And now to Bindmans LLP. I am not going to go through their Advice and my 33 criticisms of it. I will share that with anyone who would like to see it. Just two quotes from their Advice suffices.

I had referred to Lord Denning, the Master of the Rolls, in Metropolitan Properties Co. (F.G.C.) Ltd. v. Lannon (1968):[“Justice must be rooted in confidence and confidence is destroyed when right-minded people go away thinking: ‘The judge was biased.‘”

In the provinces when you ask for legal advice you only need one solicitor. In London, two. More weight than substance here.

Without any legal authority other than their own, they wrote:

To establish bias some factor outside the decision-making process itself is required to give rise to a real possibility of bias. If this were not the case, then every decision of a decision-making body would demonstrate bias against the person to whom the decision was adverse. An adverse decision does not automatically create  Accordingly, we consider that the bias argument would be bound to fail.

This was one of my 33 criticisms. In my last post, I called it drivel.

This is a nonsensical argument made on the hoof not on the basis of any legal authority. It should never be argued, just because you don’t like it, that an adverse decision is a biased one . It is the way in which a decision is reached that can evidence that .

The authors of the Advice create their own Aunt Sally here. In any event, they totally ignore the coconut. The failure of Newcastle City Council to identify their “overarching aim” in their consultative procedures and the role of Sustrans in relation to it. The malign role of the multimillion £ national cycling charity and cycling lobby , Sustrans, is the “outside factor” if you need one; it provided and sustained the Council’s hidden agenda .

And measure what they write against the first part of this post. “Unarguable”?/!

It is not necessary for me to speculate about the motivation but, in the context of the Advice as a whole, this paragraph is intimidation and it perverts the course of justice in that it effectively prevented me pursuing judicial review proceedings against the LGO.

Sadly, three solicitors rejected my contention that the Advice was a gagging exercise breaching my human rights.  Individually and collectively they besmirched the fine reputation that Sir Geoffrey Bindman QC had earned for his firm over many years before his retirement.

Stuart Knight, on behalf of the Legal Ombudsman, ruled that Bindmans should answer my criticisms. They never did. Instead, a fifth solicitor said that the other four were right. In 10 days, including Christmas and Boxing Day, dealing with the follow up that I had started 15 weeks earlier, Kxxxxxx the investigator, and Sxxxxxx one of their 17 Legal Ombudsman summarily dismissed my complaint. And the Chief Legal Ombudsman and her CEO didn’t want to get involved.

We have now ended up where I began my story. Who should carry the can?

MY NEXT TWO POSTS WILL EXPLORE THIS AS AN EPILOGUE – First – “Good Lobbies and Two Very Bad Ones”. The second – “The Fly in the Ointment, Human Fallibility” and “The pliability of fact in the decision-making process.” I have some suprises for you.