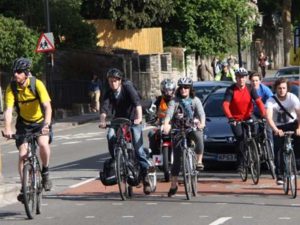 Cyclists in Bristol – Their lives in your hands

WITH MORE WORK FOR THE EMBATTLED NHS

In this post see Sustrans, national cycling charity and cycling lobby in their home base, Bristol, Britain’s first Cycling City – when you have read this you may hope that it is Britain’s last one. In my next post see Sustrans nationwide.

Cycling in the ozone by the sea or on continuous segregated cycle lanes in the countryside away from poisonous traffic fumes and risk of death or serious injury, or in towns and cities in parks and open spaces, in discontinued railway tracks, great. In central London, where for many it is the only cost effective way to get to work, making it as safe as possible given that others must get around too. If only Sustrans had stuck to that, I would not be writing any of this. That would be consistent with their Vision Zero, though more than a trifle optimistic in London.

On a bicycle – going shopping to the supermarket, dry cleaners, charity shop with a Deliveroo box on your back, going to an out-of-town shopping mall like MetroCentre in Gateshead, going out for an evening’s entertainment, or to the pub or in the crowd to the match on Saturday, or taking the kids to school or nursery in the early morning rush hour. Oh, yes, and going to and from work some distance from where you live also in rush hour.

Cycling on narrow, busy streets made narrower by cycle lanes. Up and down hills like Humbledon Hill in Sunderland. I used to cycle up it on my way to school. One day I almost killed myself going down. My front wheel caught in a tram line and I veered across the road. Mercifully nothing was coming the other way. A very close friend of mine, James Sanford (1978-2012) did the same thing in Singapore on a charity cycle run. Only he hit a curb, veered across the road and was killed.

An aging population. The vagaries of the weather. Wet and icy roads. And toxic diesel and petrol fumes especially in rush hour.

£2.3million pounds spent on signs reducing 30mph to 20 mph. Journey times increased by 50% and emissions likewise. Vehicles are more efficient at higher speeds. Nearly 200 people die from these emissions every year in Bristol. And children are positively encouraged to cycle in them! Is this in the name of equality for cyclists? We must count it fortunate motorists are not again required to have someone with a red flag walking in front of them.

In SUSTRANS Annual Review 2013-2014 they say “ We think a street should be designed for residents rather than those driving through, with slower speeds and slower moving traffic , so people are more inclined to walk and cycle for their journeys, some or all of the way .”

Relate that to this: Times 20 February 2016 p4 “Traffic delays are worst in Europe and getting longer …. A spokesman for the department of transport said ‘We are making the most extensive improvements to roads since the 1970’s investing a record £23billion to keep our country moving and make journeys faster, better and more reliable for everyone.’”

Cyclo-maniacs think that what they want for themselves everyone else should want, when it isn’t. I witnessed precisely the same arrogance in those whose belief in the dogma of Inclusion first stigmatised then closed over 100 special schools, many very good ones. Here, as there, those who were supposed to address objections suppressed them. Professional courtesy always impeccable.

In 2015 Nick Clegg as Prime Minister pledged £114m to double the number of cyclists by 2020. Is that really a good idea in the UK? More of this in my next post. After that back to Newcastle.