The CYCLING SCANDAL – PERSONAL INTEGRITY IS NO MORE, INSTEAD SOLIDARITY WITH YOUR MATES OR JUST DOING YOUR JOB? 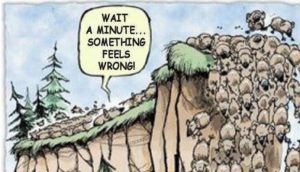 This is the stuff of autocracy and the institutionalized cover-up.

A good friend of mine calls me a Bedlington terrier. I gnaw at a bone when there is meat on it.

And there is meat on this one if you read my last post.

Newcastle’s plan for cycle lanes for non-existent cyclist, narrowing an already narrow road and congesting it still further with a hidden agenda that one driver in five should give up their car for a bicycle for all local journeys is crazy. Trying to implement it reeked of maladministration,

The Local Government Ombudsman didn’t want to criticise anything.

I gnaw at this bone, but no-one wants to know, and my legitimate complaint is suppressed.

Assistant Local Government Ombudsmen backed up their colleague Kim Burns, Bindmans lawyers close ranks to say I have no arguable case for judicial review and it would be “bound to fail“. When it came to the crunch an Investigator and one of the 17 Legal Ombudsmen in 10 days over Christmas and Boxing Day chickened out of asserting that Bindmans should heed the decision of their colleague and reply to my criticism of their Advice.

Meanwhile the Local Government Ombudsman, the Legal Ombudsman and her CEO had highly paid leave of absence. And other partners in Bindmans remain silent.

What this means is that solidarity with your mates or just doing your job preempts personal integrity.

See the danger. The train driver transporting Jews and others to Auschwitz says that he is just a train driver; mind you, in his case if he refused to do his job he and his family would have ended up in Auschwitz. No such excuse for the apparatchiks in the offices of the Local Government and Legal Ombudsman who sit at their computer terminals and do the job they are hired to do.

One final example before I say the price we pay.

For my final throw, at minimal cost, I wrote to Bindmans saying that I was going to take them to the Small Claims Court alleging breach of fiduciary duty – negligence and breach of contract.

Bindmans never cease to surprise me. Even before I engaged them they were saying that “you could easily be looking at costs of £50,000 to £80,000 costs.” London lawyers turning away business! Then, when I do engage them, they go to inordinate lengths to give me some of my money back! If you read just my last post you see what nonsense they write. You see the evidence they ignore. It would have been much easier to write the pre-action protocol letter than their gobbledygook Advice.

Now, a new surprise. Bindmans do not reply. They instruct another firm of solicitors to reply on their behalf, BLM. The letter is signed BLM with no indication as to who actually wrote it. Katie Connell a solicitor for BLM sends it to me. She says she is “the file handler.”

My guess is that Bindmans wrote the letter but preferred to reinforce it by getting BLM to put their name to it. The sting in the tail “we do not consider that this is a claim for the small claims track due to its complexity … a claim of the kind you propose would need to be determined by a High Court Judge,” Implied, this could cost you a small fortune!

But maybe they are right. Dealing with 33 criticisms of their Advice would be complex. I write back to say I will rely on just the criticisms of just two paragraphs and the evidence contained in two pages of the Executive Summary of the 100 page dossier. A first year law student could deal with this, never mind a High Court Judge.

And I write “in letter-writing anonymity is the recourse of cowards and often scoundrels. You continue to refuse to name the author of the letter you sent to me. You say you are just a file handler. You also describe yourself as a solicitor. Until Bindmans told me, I did not appreciate that the SRA Code of Conduct 2011 prevents solicitors from drafting any documents relating to any proceedings containing a contention that they do not consider to be properly arguable. This applies to you and I would have thought to all the 200 or so partners in BLM in whose name the letter has been signed.”

This was my reply:

I for my part have no wish to prolong this dialogue.  You say, “any allegations that our client’s advice was negligent is denied.” It is blindingly obvious that Newcastle Local Authority was guilty of maladministration, that Ms Kim Burns was biased in its favour and turned a blind eye to it, and Bindmans LLP did likewise, looking for ways to distance themselves from the accusation.

It was professionally outrageous that Bindmans should say that a 100+ page dossier evidencing the above did not provide an arguable case for judicial review and that it was “bound to fail” and that they disobeyed the ruling of the Legal Ombudsman that they answer my criticisms of that decision.

You have now joined quite a long list of people who see black as white.

I shall now refer this to the Court of Public Opinion and refer both BLM and Bindmans LLP to the Solicitors Regulatory Authority alleging that the stance you have taken on their behalf in relation to my threat of action in the Small Claims Court is itself not arguable and is bound to fail, this in breach of the SRA Code of Conduct 2011.

There is an old adage “When you are in a hole, stop digging.” Bindmans really shouldn’t have invited someone else to share their hole with them, and try to take advantage of professional solidarity.

The next post the terrible cost of all this. The dead hand of the past controls the present unless you break the ratchet of which this is a part. Some of my connections in Linkedin may feel this is not unimportant.