BULLYING DISEASE – HIDDEN SCANDAL Do kids with special needs have a happy childhood? 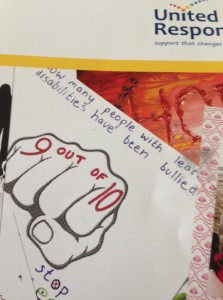 Cruelty can start with very young in our world! Bullied 12 year old Dylan Stewart recently hanged himself. It tortures many, takes young lives, leads to an exponential increase in drug dependency; and now the answer to bullying is no answer!

Those who closed special schools, over 100 in the UK, and shoehorned children with a multiplicity of special needs into mainstream schools in the name of Inclusion and Equality – I call it homogenisation – either knew or should have known that these children were going to be bullied. Everyone I have ever spoken to working with children with special needs knew.

The bullies were always there All their victims weren’t!.

Many were wishful thinkers, wanting life to be what they felt it should be for themselves and people like them, with disabilities; some in academia were dreaming of a better world; some in politics persuaded themselves that if you passed a law, gave a human right to mainstream education, you automatically created a benefit. It never occurred to them that you might create a detriment and that others had their rights too that ought to be respected.

As I say in the video in my website, they never factored human fallibility into their thought processes.

Now the sad consequences are there for all to see.

Well, there’s no limit to the ingenuity of the academic mind dealing with uncomfortable truths when they finally have to confront them.

This week’s Times Educational Supplement (29 August 2014), the 20th Century paradigm of academic rectitude in the UK, (hopefully not the 21st Century paradigm) provokes me to write this post, and underlines what I have written in my play Death of a Nightingale.

I shall let the quotes speak for themselves:

“Bullying has no cure – but we can build resistance  “A study last year from the University of Texas (bit.ly/BullyingStudy) found that anti-bullying programmes were having the opposite effect of what was intended – exposing bullies to different techniques and thus teaching them new ways to bully. And schools that boast a zero-tolerance approach do not do too well either. According to the American Psychological Association, despite the stiff words, these schools have typically a higher incidence of bullying, more suspensions, and exclusions, and lower academic achievement.

So “Dealing with a bit of adversity toughens you up and enables you to succeed. That is why advocates of character teaching say it helps to develop traits such as perseverance, self control, compassion, optimism and improved well-being, all of which equip children to succeed in life.”

There was plenty of evidence of the scale of bullying before this study – http://www.deathofanightingale.com/spy/spy8 – but this is the first recognition that the problem is insoluble – and that the attempted cure might actually sometimes make matters worse, and yes here is the ingenuity of the academic mind, bullying is actually good for you!

And it gets worse! Don’t blame them for it, blame the parents! It is the old habit of pointing the finger at someone else and not seeing where the other three fingers are pointing.

Overprotected underprepared How cosseted children fall prey to bullies.  Most parents’ instinct is to protect their child from bullies. But denying young people the space to fight their own battles may be setting them up for a lifetime of pain.”

Professor Dieter Wolke, professor of psychology at the University of Warwick, has produced a new study. The Times Educational Supplement says that he is “an authority on bullying that specialists in the field … point out their indebtedness to him.” He criticises “Overprotective parenting”.

“Overprotective parenting is related to those who become victims. It’s like you don’t get an inoculation; a small dose given so that you can fight the disease.” Or, as Nurse Ratchett might say, “Just a little scratch. It won’t hurt.”  “As bullying expert Dr. Carrie Herbert summed up beautifully at the launch of Prof. Wolke’s research in the House of Commons, ‘a leader is a bully with empathy’”

So, worse still! Bullies are good for society!

“Dieter Wolfe ‘Bullies are actually pretty healthy, quite strong and do pretty well in later life.’”

You must recognise this argument – survival of the fittest, and totally devoid of compassion. Well, let me bring you back from the libraries of the academic mind to the classrooms of the real world. Daily Telegraph 27 August, 2014

Look what you did: parents message to bullies who hounded son to death  The parents of a 12 year old boy who hanged himself after he was bullied at a new school have released harrowing pictures of their son as he lay dying in hospital. As often happens in cases such as this, out of deference to the feelings of the family or, as I suspect, for the stats the Coroner did not classify the death as suicide.

Dylan Stewart’s mother, Amanda, said she wanted to say to the bullies who had tormented him: “Look what you did.”  He had been physically attacked on a number of occasions including being pounced upon by seven boys at a bus stop a few weeks before he died.  Mrs. Stewart bullies called Dylan “Downey” a reference to Down’s syndrome, which he did not have. “It is rife at the school … he was a beautiful boy, he was so loving and miss him every day. He lived for laughing. He was always laughing with me and the family.”

My cousin Grace did not have an easy life. She was called Grace because she was born with a serious facial disfigurement and only one ear; her father was killed in the trenches in World War I. But she was tough. She qualified as a pharmacist and, with her husband she ran a small chemist shop in a side street in Sunderland, much loved by her customers. But this is the point of my mentioning it. She was terribly bullied when she was young; despite the respect and admiration of others the bullying blighted her entire life right through to her dying days in Philip Cussins House and the loving care she received there. I saw that she never lost her feeling of inferiority and social inadequacy.

And when you have read this post read the previous one “Bully for the Drug Companies – Pills all round.The peril of too much wishful thinking. Is there a more toxic alliance …?” http://youtu.be/6HpXUaQGY8I

Two extracts from my play, Death of a Nightingale, performed at the New End Theatre in London in 2008 Tracy, a pupil at Brighouse School threatened with closure, says this as part of her story

TRACY And did they begin to understand what it’s like to be bullied on top of everything else? Did they? Most kids like us are for ever being bullied in mainstream schools. Did they know? And did they know what it was like for their mums too, when they came back home? I know what it’s like. I saw “fluff” my pussy cat after a little boy tossed a bucket of water over her for a bit of fun. Did they know about all the other quite different special needs.

And, when David Harding the Director of Westborough’s Local Education Authority and Gerry Thompson his assistant pressure the head teacher of Brighouse School, Margaret Williamson, to argue the case for the closure of her school to parents:

DAVID Don’t you think that more than half of your roll could do really well in mainstream schools? MARGARET Yes, if you prepared properly for them…trained the staff to take them put an end to bullying and give them the attention and the time they need. DAVID We are going to do all of that, aren’t we Gerry? GERRY Yes, that’s in hand. We’re getting some great success stories. MARGARET Yes, you parade them like Lotto winners. GERRY That’s unfair. MARGARET But it’s true. Are you stopping bullying? Have you read how much there is of it today? Nearly every kid with special needs is bullied in mainstream schools at one time or another? It’s always the most vulnerable on the receiving end of it. GERRY It is in hand. MARGARET Do you realise that every time you fail, bullying may blight the entire life of one of our youngsters. Do you realise that? GERRY It’s in hand, Margaret MARGARET Gerry, get real, For our kids it’s not just a learning experience that they all have to go through, you know. It can be a life sentence. And when you know the number of attempted suicides in youngsters every year, it can be a short life too. GERRY We are tackling it, Margaret. We know we have to.

The moral of this sad story is that if you don’t admit to yourself your own mistakes – and not just in relation to special education – you will continue to make them. Also in this week’s Times Educational Supplement:

The SEN revolution is coming, but who will deliver it?  Reforms could be derailed by a shortage of psychologists.  An overhaul of special educational needs (SEN) Provision will expose a shortfall in the number of specialist educational psychologists which could disadvantage thousands of the most vulnerable young people, experts have warned.  Next Monday the new SEN code of practice will be introduced, hailed as the biggest reform in support and provision for 30 years ….