Meet Ashleigh Ritchie, my heroine. Tracy in my play, Death of a Nightingale, inspired by her

And Introducing you to her website: Ritch-Ability – COMES IN ALL SHAPES AND SIZES 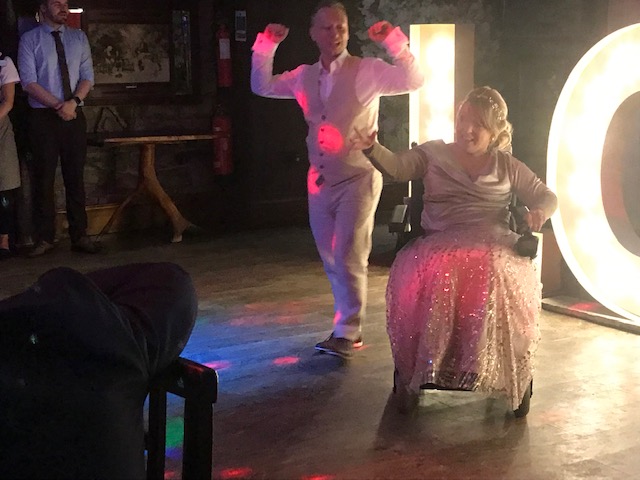 It’s now nearly twenty years since I was chair of governors of Barbara Priestman School, a special school for children with a physical disability and learning difficulties.  I still can’t get SEN out of my system and my anger at those zealots who thought that what was right for them should be right for all children with special needs and they should have an equal human right to it.

These zealots were often concerned with just one special need, their own, but one of very many, or they were ideologues preferring dogma to the reality of the world of education populated by some not up to the challenge, not easy, or just plain cruel, bullies.

To them segregation in a special school was wrong, disadvantageous, a ghetto as I recall it being called, as they tried to stigmatise them.

I remind you that in a meeting of parents called by Sunderland LEA to argue the closure of their school, every parent present voted against it. And when the LEA pressed on regardless they secured over 10,000 reasoned objections to closure signed by BPS’s friends and admirers. Not entirely surprising that Charles Clarke, the Minister of Education at the time, rejected the closure.

But better still, meet Ashleigh Ritchie today, age 38, living on her own in a housing association bungalow she helped to design. I finally caught up with her last week along with Graham who she plans to marry later in the year. He has designed a website for her – Ritch-Ability  COMES IN ALL SHAPES AND SIZES –  so you can meet her there yourself. You should. You would learn a lot about disability and triumphing over it, about giving as well as demanding, about not feeling sorry for yourself. Read her profile in Linkedin. Never mind the X Factor. This is the stuff of the WOW Factor.

Meeting her brought the memories flooding back, and not just for me, for Ros, my wife, who found the time every week for many years to go to BPS to help her reading. For me I recalled Ashleigh helping to front the parents’ successful campaign to keep the school open. Meanwhile over 100 special schools, some very good ones, were closed by those with a terrible combination of myopia and tunnel vision. In one word, blinkered. It is a recipe for mediocrity when diversity, the dignity of difference, ambition and the pursuit of excellence all give way to equality in educational matters when fair play for all should be the guiding spirit. Visit Ashleigh!

I take the Times Educational Supplement every week. Most weeks I see examples of this. Only last week “Closing the attainment gap. Efforts to close the gap between disadvantaged pupils and their wealthier peers appears to be having minimal impact” And, in the article, this “If you go into most English primary schools, you will see an adult standing around or sitting next to a child with special educational needs. What are they doing? Often, not very much. The cost of that adult is substantial.”

Visit my website www.deathofanightingale.com and listen to my video. The Fly in the Ointment – If you can’t see it you can swat it.  I won’t spend time here explaining how this disaster happened and is still unacknowledged by the educational establishment.

At last a use for my early Latin! I came across a little discovery only a couple of weeks ago. I had occasion to use the Latin tag Errare humanum est – to err is human, in an email to someone who didn’t want to acknowledge it. I discovered that it came from the Roman statesman Seneca the Younger. It was just half of the tag. The second half perseverare autem diabolicum. The full tag to err is human, to persevere however is of the devil.”  It is, and not just with special educational needs as my writing sadly evidences. I prefer the literal translation “to persevere is diabolical.”

But let’s get back to Ashleigh. She is what she is today because of people like the late Fredwyn Haynes, head teacher of BPS who thought that children with SEN could do anything given the time that mainstream schools could not provide, Ros Mearns, the inspiring music teacher. Pod, who taught English. Marie Antcliffe – I remember her teaching how to bake tarts My friend to this day, Jane Fraser, who went on to head another good special school that survived the cull, Cedars School in Gateshead. Also, the physio’s and the school nurses.

I have a special memory of Presentation Days when everyone seemed to be achieving something. And there were little cameo scenes. I remember one playlet where Ashleigh, playing the part of a headmistress in the play, hit Fredwyn over the head quite savagely with a rolled-up newspaper. I remember when I saw her acting in the local Royalty theatre too. But it was no acting when she joined parents on a trip to London to lobby David Blunkett and the Department for Education. 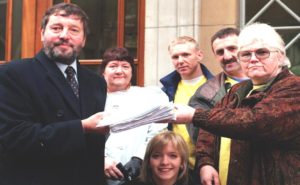 Inclusionists demand parity of esteem. They breach the Tenth Commandment “Thou shalt not covet.” Self-esteem is what it is about. That was BPS’s gift to Ashleigh and the other pupils there.

But Ashleigh will always mean something even more to me. I was so annoyed at the time by the politics of Inclusion that I wrote the play Death of a Nightingale and staged it for a month in the New End Theatre in Hampstead in London. That’s another story. I tried to capture the mood, the soul, and the spirit of BPS in Brighouse School. Why the name Brighouse? My little joke. Sir Timothy Robert Peter Brighouse was a prime inclusionist. I suspect he never saw it.

Ashleigh was the role model for Tracy, who was beautifully portrayed in the play by Samantha Dorrance from a wheel chair. Max Lewis, by the way, with Down’s Syndrome, who had acted along with Kate Blanchett in Notes on a Scandal somehow encapsulated the cheery, and at times cheeky determination of many others I met along the way.

Understand the arm- twisting, the chicanery, the cover-up, the duplicity, visit the play. Understand also the special gifts a good special school can provide.

One thing though, Tracy’s last words in the play are not Ashleigh’s, they are mine. “Can I leave you with a really naughty thought to take home with you. There are some little creatures that build and defend their own nests, but they cannot move on and they cannot do anything else. That’s what they do. They build and defend their own nests. That’s all they do. That’s all they’ve ever done. That’s all they ever do. There’s a name for them. “Termites”, yes “Termites”. If there are any of them here tonight, let them go to their beds and sleep peacefully … if they can. Y’see I am not just going to blow away in the wind. Good night.”